All right, so I know I'm kind of dragging up an older subject, but with Chaotic I guess that's all everything is now huh? Anyway, so all we know about The Frozen is that they're a mysterious tribe residing somewhere near the Glacier Plains. We've gotten this information both from Blugon's original card and from information from Chaotic's original inspiration, Chaotic: Now or Never, which tells us about Hinya-Iha and her book of magic.

There have been other hints on other cards about The Frozen, such as the original Owis where he's tracking something in the Glacier Plains, Hifdan's card, another Blugon Card and a redesign for a Blugon card that was never released - all showing icy figures or hinting at beings of Glacier Plains. Glacier Plains itself even has some kind of creature frozen in the ice in its card art. Plus, there's the location The Storms, which has statues carved by unknown creatures in the Glacier Plains (or so it seems), where Malvadine was to be displayed in an unreleased card that makes it seem like the Mipedians were moving in on the territory of The Storms (potential Frozen land?).

With everything that's been hinted at, I can't help but believe that The Frozen was something like a tribe of "witches" for lack of a better word lead in a matriarchy by Hinya-Iha. As I picture them, I see blue-skinned beings with purple runes and markings covering their bodies like tattoos, while their garb would include various animal skins tied together into clothing, as well as large tribal masks carved from wood for intimidation purposes. For Hinya-Iha I pictured her as carrying a staff and having horns kind of like the Balrog from Lord of the Rings that curved in toward her face. I bet the tribe color would've been purple, and their introduction would've revolved around their ability to cast magic (as stated in the Book of Hinya-Iha), which would allow The Frozen, and only The Frozen, to cast Ice elemental attacks that could slow down opponents as an after affect. For some reason, I also want The Frozen to be able to shape-shift, but not to the extent of Iparu, more like an animagus from Harry Potter, and they'd transform into their spirit animal. I picture their whole storyline revolving around the preservation of their customs and defending their land as the other tribes move in to conquer it (to mirror actual indigenous tribes in the real world).

I hope that if Chaotic ever gets a reboot that The Frozen come back something like this, because I'd pay to see that. In the show, we could have Tom trying to find out information about The Frozen from Blugon, only to be shut down - forcing him to follow Blugon through Glacier Plains to reach The Frozen himself. But he'd obviously have to have been followed by the likes of a malicious Chaotic player so that The Frozen's whereabouts could be leaked throughout Chaotic and Perim to trigger their whole defense agains the other tribes. This all practically writes itself, and I want it to happen soooooo badly xD

An obscure icy being maybe behind Hifdan?

Behind Blugon there's an icy creature

The Storms, a location seemingly in Glacier Plains region that's possibly hinting at the existence of The Frozen 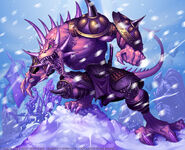 Malvadine in the location The Storms - maybe the creators were hinting at what I described of the Tribes moving in on Frozen territory?

Card Art for an unreleased Blugon featuring an icy hand to the left
Add a photo to this gallery
Retrieved from "https://chaotic.fandom.com/wiki/User_blog:Leviathan657/The_Frozen?oldid=32307"
Community content is available under CC-BY-SA unless otherwise noted.