Welcome to Chaotic (Part One)

"Well, we could stand here watching them download scans for the next fifty minutes, or we could go grab a pizza."
―Tom to Sarah, Scavenger Scan

Thomas Anthony Majors is the main protagonist of the Chaotic TV Series. His Chaotic codename is MajorTom.

Tom's original design was a 12-year-old blonde with black gloves and jacket, along with blue jeans, sneakers, and a red-and-white striped shirt. He and Kaz were also meant to be archenemies, with Tom allying himself with the OverWorlders and Kaz with the UnderWorlders.

Tom is a regular human teenager with black hair and blue eyes. His skin is a bit more tanned than some of the other characters. He always wears a grey t-shirt with a target symbol on it and blue jeans and trainers.

Tom Majors is mainly an OverWorld player. While he has been playing Chaotic for as long as he can remember, he knows far less about things than his friends do about the world's of Chaotic and Perim. Despite his lack of knowledge Tom is an excellent player, especially when using Maxxor. At first, he was very shocked and overwhelmed when he first transported to Chaotic, transforming into his Creatures, and experiencing the battle "for real." Tom quickly gets over his fears and confusion.[1]

Tom is a bold–maybe too bold–risk taker and thrill seeker. He loves playing Chaotic, exploring Perim, and experiencing excitement and adventure. He always helps those in need, and his selflessness sometimes surprises other Chaotic players and Creatures alike, like when he kept his promise to Smildon to cure the disease destroying Prexxor Chasm. He cares a lot about his friends Sarah, Kaz, and Peyton as well as the well-being of the creatures of Perim with whom he isn't enemies with. A naturally gifted player who relies on his guts, he is a force to be reckoned with.[1]

Tom has his first ever 'real' Chaotic match in Welcome to Chaotic Part 1. He fought as Maxxor against his opponent SamShady, who fought as Takinom. There were many twists and turns, and the cliffhanger at the end of Part 1 left Tom/Maxxor in a tight situation. The match concluded in Part 2. Tom later meets Sarah, Nauthilaux, Mezzmar, and Najarin while Kaz is looking for his 'lost' scanner.

Over Under Rent Asunder

Kaz is challenged by an undefeated player while Tom gets a history from Peyton and Sarah about Perim. This lesson about Perim's history gives him a better understanding of the feud between the OverWorld and UnderWorld.

Tom tries over and over to scan Yokkis, but ends up just falling for his pranks.

The Thing About Bodal

Tom Wipes out Agro999's entire Battle Team with Maxxor, but Agro999 (real name: Tank) uses a Mugic card to bring back Tangath Toborn. Tom/Maxxor then loses to him by falling off a waterfall in Glacier Plains. His only chance lies in Bodal.

Tom, Kaz, and Peyton need to rescue Sarah after she's taken prisoner by a Danian army on her latest scan quest.

Everything is in Flux

Tom and Kaz ruin Krystella's plan to trap Xaerv. She decides to pay them back by teaming up with Klay. When Tom has a battle with Klay, all isn't as it seems. Klay has a spy, and knows all Tom's strategies. Tom needs to find another way to win.

In Part 1 Tom and Kaz find ReggieOne, a boy who has lost his scanner, and his Chaotic-self. Tom needs to plays a one-on-one wager match against Bruiser33. He loses, and thus forfeits his Maxxor card. In Part 2 we see the 'real' Maxxor in Perim. Tom and his friends help him and the OverWorlders fight the Mipedians while rescuing Perim-Reggie. Tom is later offered a Maxxor card from Reggie in reward, but he says he wants to scan Maxxor 'for real' when they meet again.

Kaz goes on a dangerous mission to help his all time favorite creature Chaor.

Peyton and Krystella do a boys vs. girls match while Tom learns about how Intress single handedly saved the OverWorld.

Tom's in a slump and he thinks it's because he lost his Maxxor. He meets a kid and receives a lesson that cards don't win matches, players do.

Kaz scans a creature that's actually two in one.

Peyton makes Tom go into the desert to prove to him that not all Mipedians are bad. At Tiaana's request, Tom enters a drome battle with a Mipedian scan.

Meanwhile, Tom quits going to Chaotic because he doesn't have Maxxor anymore, but Kaz gets him to try to find Maxxor again. First they trick Bodal, then scan Zalic, and go to Chaotic, then to the Gloomuck swamp, where Tom scans Maxxor and they leave. Maxxor finds out about the Mugic and goes into hiding.

A player has been thrashing everyone in the dromes and Peyton's next unless he can figure out a way to stop the all powerful and near unstoppable attack Allmageddon!

When Peyton and Kaz's rivalry spins out of control, Tom makes them do a scanvenger scan quest.

Tom finally uses his new Maxxor scan in a drome but discovers Maxxor's sick, and everything he sees looks like something out of a horror movie. Tom goes to Najarin for help, and he might get it...if he can survive the traps!

It's up to Tom to save Maxxor from a terrible fate. But time's running out as both Chaor and Van Bloot race to find the OverWorld leader first.

Tom flees to Perim when Kaz accuses him of cheating. There he meets a group of players who are destroying ultra rare locations. He stops them before they can destroy Akarak Cavern. As it turns out he and Kaz weren't enemies at all. They were acting! 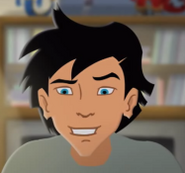 Tom From Chaotic: Now or Never!

Retrieved from "https://chaotic.fandom.com/wiki/MajorTom?oldid=45332"
Community content is available under CC-BY-SA unless otherwise noted.